“… it is not a question of describing houses, or enumerating the picturesque features and analyzing for which reasons they are comfortable. On the contrary. We must go beyond the problems od description-whether this description be objective or subjective, that is, whether it give facts or impressions-in order to attain the primary virtues, those that reveal an attachment that is native in some way to the primary function of inhabiting.” Gaston Bachelard, The Poetics of Space, 1957

The location of the self in the buildings and spaces we inhabit allow for the definition of our experience. The loss of structures, whether actual or metaphorical, creates voids in our existence that ache to be filled with reconstructed memorials, not so much to mourn the loss but to mark it, and in turn, celebrate the importance of their being The fluid stream of memory, with its meandering states of wakefulness and sleep, is the constant thread that implores the act of imagining and re-imagining those spaces, and constructing the residue of the states they contained. Restoration is the fetishization of a series of performances done on the Antioch College campus after the announcement of its closing in 2007, my 20th alumni reunion. I had not been back to campus since the early 1990’s, and many of the buildings I had inhabited as a student no longer existed. With the conflicting emotions that were brought about by the closing and the absent landmarks of my experience, I undertook a project to exhume their remains by marking their placement with stakes and string. The process involved the transposing of existing blueprints of the campus in full scale onto the sites that these buildings once occupied. In Restoration, you see the video documentation of this act of memorial on the site of Norment House, a student dorm, and its willful destruction as a training exercise for the Miami Township fire department. Once I finished the layout of the stakes and string, I walked the perimeter, carefully tracing it with cornstarch sifted over the line. I then removed the stakes and string, leaving trace evidence of what was once there, doubling the conceptual act of removal from the site. The cornstarch was also a way of leaving a trace that would erode over time, returning the site to its state of neutrality. My experience of this building and the memories it held were made present for the duration of the act. In the gallery, you now see a scaled down version of the footprint of Norment House in the form of a planter and there is a periodic release of cornstarch from above to mimic the act of tracing. Throughout the exhibition, there will be grass growing in the footprint, a nod to the life that was once contained within the structure and an embellishment of hope that the history this institution represents can continue to grow and thrive. 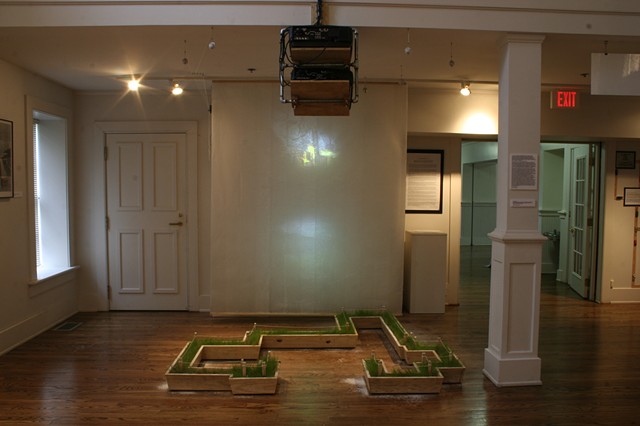 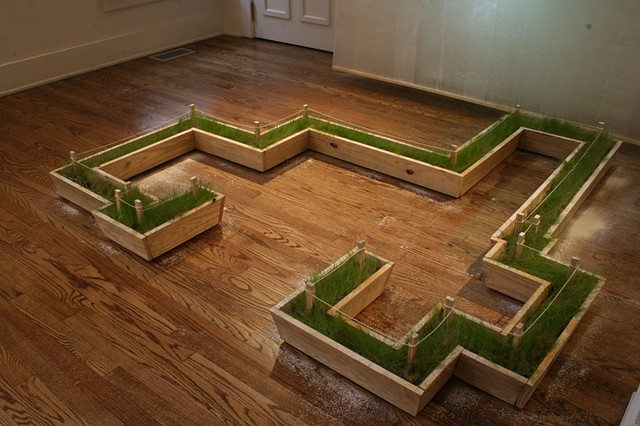 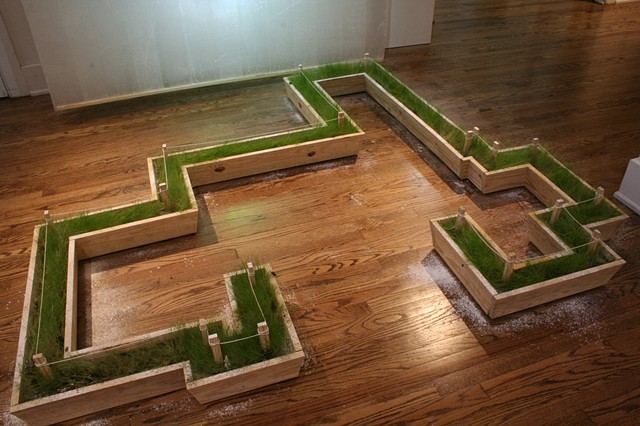 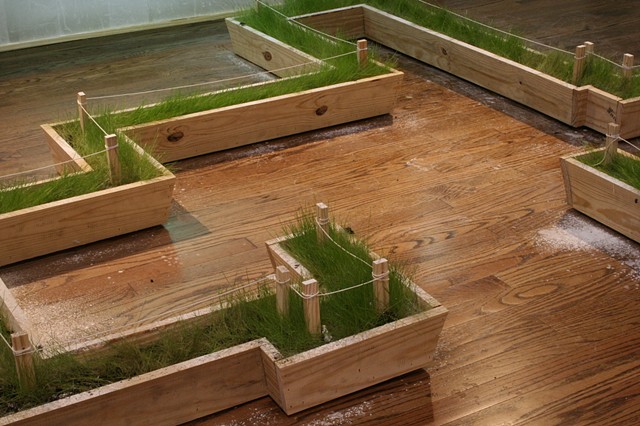